The reason behind sharing this personal story is to decode my relationship with money, this post also puts out into public the story of family’s struggles over the years.

As mentioned in About Me, I am from India, my parents continue to live in India. Born into a relatively wealthy family, my father opted out of their business and went on to work in a government owned technology company. He did well for the first two decades or so, managed to build himself a house and grow in the organization. My parents were always cautious in spending and these values passed on to us.

Strike 1: Depletion of Investments and Faith

India had to opt for various reforms in early 90s, which opened up its markets to global investors. In 1992, the BSE Sensex grew from 2000 points in January to over 4467 points in April. This was a massive bull-run, fueled by stock price manipulation orchestrated by Harsad Mehta. On April 28, 1992, the market crashed by 12% wiping off billions of investments.

This single event resulted in losses for my father, as a result of it, he never spent a single dime towards market investments. The faith on market forces was broke, and remains to be so. He missed on the growth options available.

Strike 2: Surviving on partial pay for almost a decade changed the relationship with money

As a result of economic reforms, state owned companies started facing massive competition from new entrants, their inefficiencies/mis-management laid bare and my fathers employer ended up being a loss making firm. The direct impact of this was overdue salary payments, take-it-or-leave it early retirement options became the only choices.

Multiple years of partial pay meant we struggled managing our lives, and were extra frugal for many years. The unpaid income is lost, and has never been paid. He finally opted out with an early retirement. Switched careers in mid-50s to become a professor and lasted another decade. This helped him build a little corpus and helped his confidence.

The topic of money was not openly (and still is) discussed, we had no real financial education except for being frugal. I believe that there was a sense of shame for them, for they actively tried to hide their situation with their friends or family.

I still remember an argument between my parents when my father had to pay extra 300 INR (5 EURs) for an AC train ticket for me. This was because I was to accompany a cousin who could afford to travel in AC. It was one of the few times when the strain was laid bare.

The other event which I remember is when I was about to start my first job, and he wanted me to take a flight the first time. To support this, he took a personal loan and give me a little bit of money for the first month. He simply had no savings to help me out then, but he was proud of me. I am happy to add that it was the last time I asked him for money during my working life.

So, my relationship with money?

Do you have any stories to share about how your relationship with money was shaped?

Corona forced us to learn from our money habits.

Money is not evil

This site uses Akismet to reduce spam. Learn how your comment data is processed.

Money First – Zuerst Das Geld is now Available on Amazon for Kindle and as Paperback. 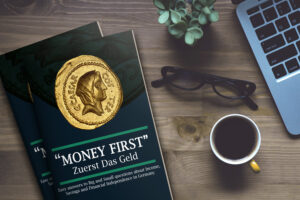 Pick your copy now or download a FREE preview and get awesome at your financial well-being!